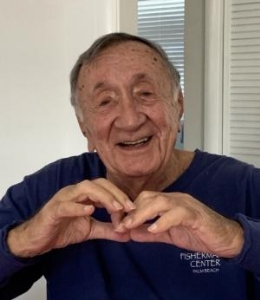 George is survived by his wife of 62 years, Carol; and five children; Laura (John Brzostowski), Nick (Katie), Christian, Shauna (Lee Talbot) and Julianne (Marty D’Entremont); and sister Joan Lavender. In addition, he is survived by 14 grandchildren, Lillian, John and Joseph Brzostowski, Kate, Jen, Spencer and Olivia Talbot, Micah, Simon and Reese D’Entremont, Eva and Jack Lodowski, Lydia and George III Lodowski; and one great-grandchild, Oliver Ziegler. George is the brother of the late Kenny and Lenny Lodowski. He loved his family and was very proud of each member which included his extended families, the Bozicks, Chiaramontes, and Lavenders.

Having a drink with his buddies at the VFW and American Legion in Fort Pierce, Fla., was part of the fabric of his life. His dedication and commitment to the veterans earned him the honor of being a three-time Legionnaire-of-the-Year award winner. George was an avid reader, putting multiple books into play at a single time, and regularly watched horse racing and Old Westerns. George was armed with a distinct political viewpoint and sense of humor that would raise an eyebrow and could bring any family discussion to a conclusion. Each household in Maryland deserves a master blue crab picker to properly educate the young ones on the nuances, and there are none better than George.

He was born in Worcester, Mass., the son of Walter and Julia Lodowski. The family moved to Washington, D.C., when George was a young boy. After serving in the army in Europe, George married the love of his life, Carol Scuderi, and moved to Temple Hills, Md., where they raised their five children.

Before spending most of his working life with the Washington Suburban Sanitation Commission, George operated a doughnut shop, was a Washington, D.C. police officer and an elevator repairman. After retiring, he followed the sun and spent his summers in Fenwick Island and winters in Fort Pierce, Fla.

A memorial gathering to celebrate George’s life is planned for the future.